Oscar Romero was born in Ciudad Barrios, a town in the mountains of east El Salvador, on August 15, 1917. He was the second of seven children. At thirteen he declared a vocation to the priesthood and in February 1977, Oscar Romero became the archbishop of San Salvador.

Much like our current Pope is for us today, Father Romero was a source of strength and hope for the poor and for the oppressed of El Salvador, working with and for them, taking their struggles as his own. Romero wrote and spoke passionately and publicly for the need for Christians to stand up for those who could not stand for themselves, and to work for social justice. He frequently faced danger from those who opposed his ideas. On March 24, 1980, while celebrating the Eucharist in a small chapel called “La Divina Providencia”, (one day after delivering a sermon where he had called on Salvadoran soldiers, as Christians, to obey God’s higher order and to stop carrying out the government’s repression and violations of basic human rights), Archbishop Romero was shot and killed at the altar by a death squad assassin. Archbishop Romero paid the highest price for his commitment to the oppressed, he died, but his words, deeds and actions remain very much alive. Because of his courageous stand for justice, he became a martyr not only for poor Salvadorians but for all struggling to overcome oppression and poverty.

Today, his sermons are read and studied as powerful reminders of Christians' obligation to fight for a just society. His fight for human rights led to a nomination for the Nobel Peace Prize. He spoke words of peace, in a very violent world. He knew that when the world became a witness, it is harder for groups to terrorize, torture and murder. The example of Romero's courageous life and ultimately his death continue to inspire those who struggle for human dignity and justice. 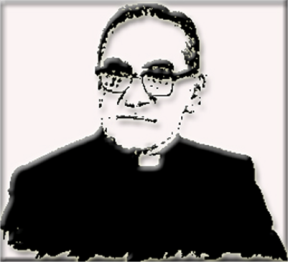